The British pound surged against the U.S. dollar on Wednesday after an official from the European Union indicated that progress has been made in the Brexit negotiations.

Sterling rose 1.2 percent to $1.3022 per dollar, reaching its highest level since early August. 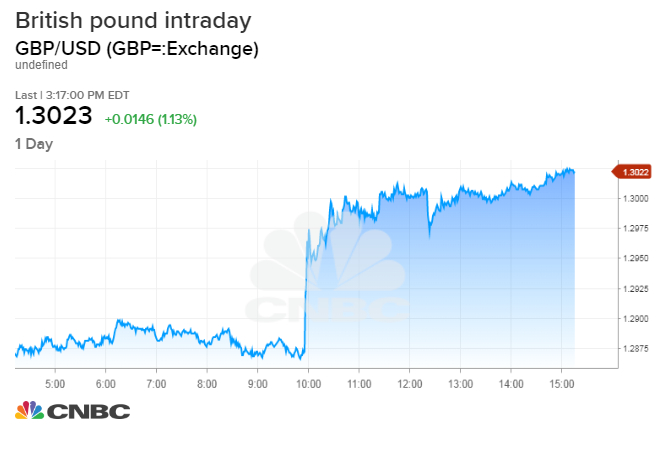 Michel Barnier, the EU’s chief Brexit negotiator, said Europe is prepared to offer an unprecedented partnership to the UK. “We respect Britain’s red lines scrupulously. In return, they must respect what we are,” he said. “Single market means single market … There is no single market a la carte.”

“The news earlier in the day had been less positive, with reports suggesting that high level officials are not optimistic of an agreement ahead of the EU summit in the middle of October,” Craig Erlam, senior market analyst at OANDA, said in a note.

“This acknowledgement from Barnier that they are prepared to offer a partnership that has never existed with another third country – a significant shift from the previous position that the UK must choose a pre-existing model in any future relationship – suggests the EU is ready to soften its opposition on certain issues in order to speed up negotiations,” he said.

With both senior European and British government officials refusing to budge from their respective negotiating positions in recent days, the prospect of a no-deal Brexit has piled pressure on the British currency in recent days.

U.K. citizens voted to leave the European Union in June 2016, with negotiations between the two groups starting last year.

“Looking further ahead, our strong conviction remains that we think the UK is headed for a soft-Brexit, which will ultimately take GBP/USD above $1.40 over the medium term. We think the institutional and political constraints to a no-deal are sufficiently large to prevent such a scenario,” Kamal Sharma, director of G10 FX strategy at Bank of America Merrill Lynch, said in a note.

—Reuters contributed to this report.