A group of education activists urged Gov. Gretchen Whitmer on Tuesday to speak out about settling a lawsuit filed by Detroit schoolchildren over their access to literacy. They also plan to protest by car outside her home in an effort to avoid a prolonged legal fight.

Members of 482Forward, an education organizing network in Detroit, as well as other parents, students and community members, met online Tuesday to urge Whitmer to show the same attention to addressing the needs of students in Detroit as she has to the COVID-19 crisis.

“She has shown outstanding leadership on COVID-19,” said Rev. Larry L. Simmons Sr. of Baptist Memorial A.M.E. Church in Detroit of Whitmer during the online meeting. 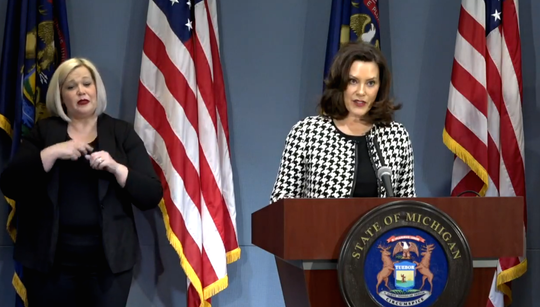 “We are asking for the same thing on this issue of education. For us, this is a quiet COIVD crisis, this lack of literacy. We are asking her to speak about this now. Please give us the same priority you give these other crises in this state.”

In a 2016 lawsuit, seven Detroit students alleged that a lack of books, classrooms without teachers, poor building conditions and extreme temperatures deprived them access to literacy in their public schools.

On April 23, a federal appeals court ruled the U.S. Constitution provides a remedy to “children relegated to a school system that does not provide even a plausible chance to attain literacy.”

The case has been sent back to U.S. District Court in Detroit where attorneys for both the students and the state of Michigan can either negotiate a settlement or set the case for trial. Either side could also appeal the ruling by Sixth Circuit U.S. Court of Appeals to the U.S. Supreme Court, which has never decided whether a right to education or right to literacy exist.

482Forward has organized an online petition and a car protest for noon Wednesday to urge Whitmer to take action now.

Whitmer’s office was not immediately available to respond Tuesday.

Dawn Wilson-Clark, a DPSCD parent and member of 482Forward, said her five children have attended 27 different schools in Detroit in their search for quality education.

“That would never happen if I was a white woman in Oakland County,” Wilson-Clark said. “You know what the problems are. …This is your moment. …. Make sure our brown and black babies are made whole.”

The press conference by 482Forward to rally support to pressure Whitmer to settle the case drew parents from across the state and region, including Trina Tocco, an Oakland County mother, who said the case of the Detroit schoolchildren is about more than literacy in Detroit, it’s about education across the state of Michigan.

“Just as Brown v. Board was more than about Topeka,” Tocco said of the landmark case by the U.S, Supreme Court in which the court ruled that laws establishing racial segregation in public schools are unconstitutional. “This case goes beyond Detroit. Literacy and education must be top-notch. Taxpayers should not be on the hook for more legal bills when a settlement is here and now.”

The U.S. Court of Appeals for the Sixth Circuit ruled Detroit students have a fundamental but limited right to a basic minimum education and have standing to sue the state for alleged violations of that right.

In a 2-1 ruling, the appeals court panel warned that the right to education “is narrow in scope” to include access to skills deemed “essential for the basic exercise of other fundamental rights and liberties, most importantly participation in our political system.”

But the appeals panel ruled the students failed to make adequate arguments about equal protection and compulsory attendance at schools that are “schools in name only.”

The lawsuit has been closely been watched by education, legal and civil rights experts, some of whom have said it would end up before the U.S. Supreme Court.

The state of Michigan, the defendant in the case, has countered that decreased student enrollment triggered a loss of money to Detroit schools and the state is not responsible for what happened in the district during two decades of on-again, off-again oversight.

Whitmer’s office, while not opposed to the idea of a right to education, has continued to fight the lawsuit, arguing the state should not be a named defendant because Detroit schools are now under local control and lawmakers had done much to improve Detroit public schools in recent years.

The Attorney General’s Office is representing Whitmer’s position, but Attorney General Dana Nessel last year attempted to distance herself from that stance and take the side of the students.

Nikolai Vitti, superintendent of Detroit Public Schools Community District, and Iris Taylor, its board president, have also sent a letter to Whitmer asserting it is the right time to settle the lawsuit.

National and state black leaders have also called for the governor to settle the lawsuit as well as two members of the State Board of Education. Civil rights attorney Ben Crump, Martin Luther King III, Yvonne M. White, president of the Michigan State Conference of the NAACP, and state school board members Pamela L. Pugh and Tiffany Tilley have asked Whitmer to settle the case to ensure equal access to education for black children in Michigan.